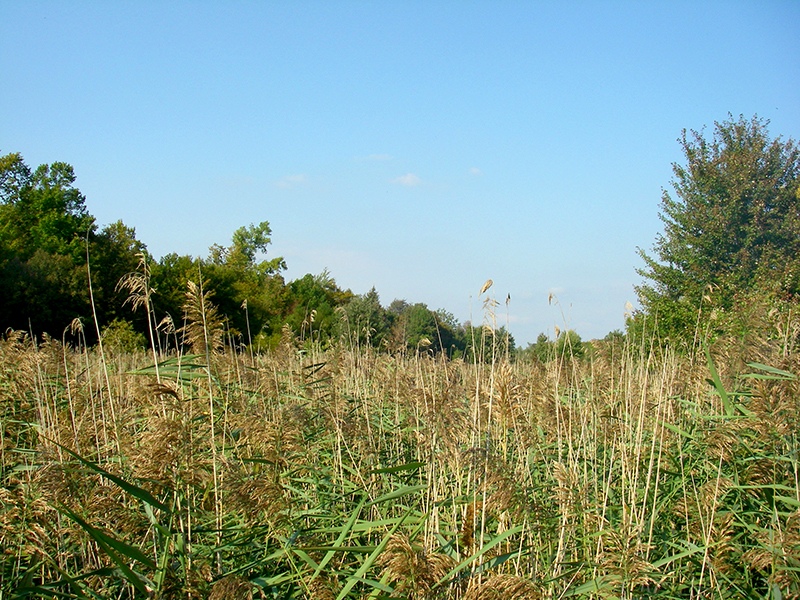 Invasive Phragmites aggressive growth is capable of out-competing all other plant species for water and nutrients like cattails, willows, alders and buttonbush resulting in expansive monocultures. The spread of invasive Phragmites could also have very detrimental impacts on the native strain of Phragmites. Large monocultures hinder native wildlife from using an area and impact valuable habitat. The rigid and tough stalks of Phragmites do not allow wildlife to easily navigate through or nest. Reduced habitat also impacts food supplies and shelter sites for wildlife, including species at risk.

Invasive Phragmites is also capable of releasing toxins from its roots into the surrounding soil which impedes the growth of and even kills off neighbouring plants, resulting in less plant diversity.

Invasive Phragmites is often referred to as an “ecosystem engineer” because numerous changes can occur when it invades an area. One of those changes is an impact on water levels. Phragmites grows very quickly which causes lower water levels because water is transpired faster than it would be with native vegetation.

Phragmites does not decompose as fast as other native vegetation. Rapid growth rates combined with slow decomposition results in a large amount of above ground plant material over several seasons. This can lead to greater rates of sediments deposition which can increase the elevation of invaded wetlands.

Invasive Phragmites can have many different impacts on the economy and society. Stands of Phragmites are composed of a high percentage of dead stalks. Dead stalks are dry and very combustible, which can increase the risk of fires and pose a large health and safety risk.

Large stands can also affect property values due to aesthetic concerns. This is especially a problem for landowners on lakes and rivers, where Phragmites can impede a lake front view.

Phragmites also has an impact on recreation. Walking just a few feet into a stand of invasive Phragmites can be difficult because of the dense growth and height of the plant. By reducing native wildlife populations, Phragmites can also limit recreational values for birdwatchers, hikers, and hunters.

The Ontario Phragmites Working Group (OPWG) is composed of dedicated people with an interest in working together to facilitate effective management of invasive Phragmites in Ontario. This initiative is aimed at reducing the current threats posed by this aggressive invasive plant to biodiversity and Species at Risk (SAR) through habitat protection and restoration.